This drill will focus on Brazil soccer style training techniques. Now that the players are moving in to the U10 - U12 age group it is important that they start being coached more heavily on how to control the ball correctly rather than just stopping the ball dead.

Take a look at the diagram below. All you will need some is cones and a soccer ball between two players. 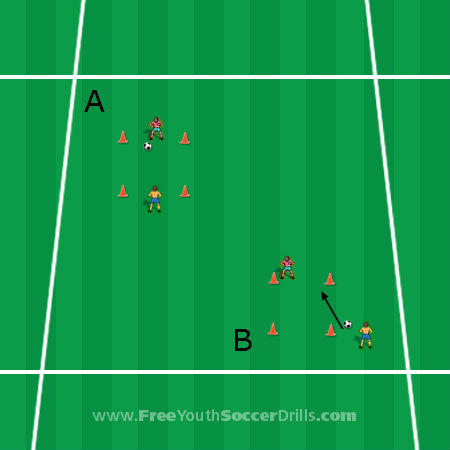 This Brazil soccer drill will focus the players on how to correctly 'receive' the ball once it has been passed to them.

You will notice from the diagram that 'B' are doing something slightly different. Here, the player who receives the ball will use the outside of his right foot and push the ball with one touch past the right cone. They will then look to pass the ball back to the player in red between the other two cones as shown.

In a game situation you constantly have to move in order to keep the ball away from opposing players and create room for another pass, this drill demonstrates that.

The great part about this Brazil soccer style drill is that there are so many progressions that can come from it. Take a look at some ideas below:

- Start the drill from the start again and this time ask the players to keep the ball moving at all times, if the ball completely stops at any point they lose and they must sit down, last team standing wins.

- Ask the players to only use one foot to pass the ball. This will make them think about passing the ball to the other players foot. Try this with both feet and don't be afraid to demonstrate how it should be done using your strongest player to help.

- Those wearing yellow jerseys in the diagram above once receiving the ball have to take a good touch away from the area and head toward the other coned area and continue the drill (so 'A' yellow jersey moves to 'B' and vice versa).

- Add a goal to one side of the marked out area and each time you shout a players name, next time they receive the soccer ball they must take a good touch away from their body and then shoot at the goal using the inside of their foot or the laces.

- When the player receives the ball he takes a good first touch toward the player and then attempts to dribble past the player without losing the ball. Try the 'Skills & Tricks' page on best ways to do this.

-> Ensure that the correct passing technique is used. I.e. side of the foot and that both feet are used when required.

-> The inside and outside of both feet should be used to control the ball and push it to one side in order to run on to.