The History of Soccer

Discovering the history of soccer isn't as straight forward as you might think. This is partly due to the fact that there were many similar games played long ago which might resemble soccer but are totally not alike.

Much research has been done on the history of soccer but I am going to keep it as short and as simple as possible (just so it doesn't get too boring!)

History of Soccer Tournaments from around the World - Click Here! 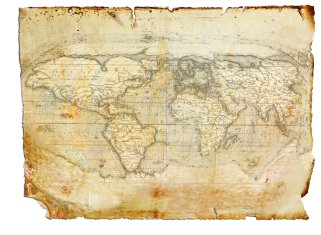 It has been said that the Romans and Ancient Greeks played many ball games that involved the use of their feet. An on-going theme about sport back long ago seems to be the high level of violence in which these games were played at.

Perhaps earlier versions of soccer were played as far back as the second century BC where the Chinese would play a rather dull kicking game. Many warriors (including the Ancient Greeks) would use soccer related games in preperation for battle.

Furthermore, it appeared the Chinese military as far back as 3000 years ago played a game called cuju (kick-ball). Cuju involved kicking a leather ball through a type of goal made from bamboo canes and silk cloth. 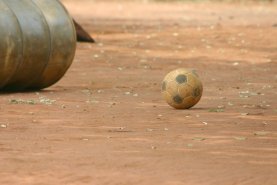 In medieval France a violent version of soccer originated called la choule. Although when I say soccer, any part of the body was allowed along with any accessory to get the ball into the opponents goal. The game was so violent in fact that it was banned for a period of time.

However, a different version the game caught on in medieval England and became very popular with rules and regulations soon being assigned.

The English came up with the 'laws of the game' in 1863 when the Football Association was formed.

A memorable part of the history of soccer came in the first world war. England and Germany were fighting on the Western front until Christmas Eve 1915 when a temporary truce took place between the countries. From somewhere a 'football' was thrown out and both Englishmen and the Germans began a free-for-all soccer game. From boxing day onward they were back in the trenches shooting at each other (with guns... not soccer balls!) Funny old game isn't it?

The first international game was played between England and Scotland in 1872. Form here onward the game became very popular in Europe and soon spread to many different parts of the world.

According to reports soccer was first played in the USA in 1827, although once again it was played between college teams on 'bloody Monday' and fists were also used. 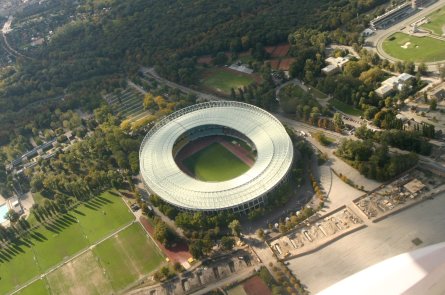 Soccer is now widely considered the most popular sport in the world. Cristiano Ronaldo in 2009 was sold to Real Madrid from Manchester United for £80 million ($120 million).

Players wages are topping $150,000 per week. Massive stadiums such as the one above are being built all over the world.

The history of soccer has come along way since the Ancient Greeks would enjoy a violent free-for-all. The world cup and continental competitions attract huge crowds and the standard of players has become very good.

Leave the history of soccer - return to homepage