Coaching youth football is easy and fun with this crazy drill! The numbers game is one that the players will go home singing and practicing all the time.

Take a look at the diagram below. A very easy set-up, you almost don't need a marked out area but it makes it easier keeping track of the younger players.

Each player and the coach will need a ball each. 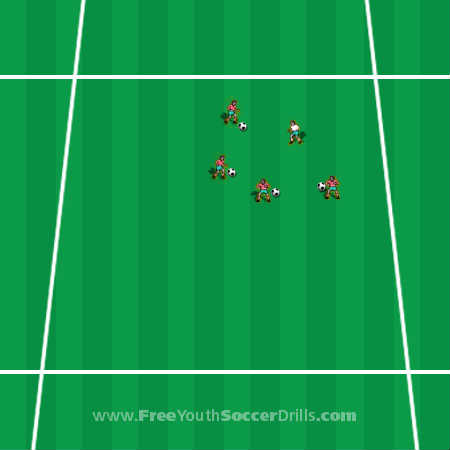 Youth football drills like this one are ideal for warming-up at the beginning of your session. As the coach, you need to know this drill off by heart or have it written down. The coach will need to sing/chant one verse and then get the players to repeat it. After they have done this the coach will demonstrate what the chant represents and what actions the players must follow after they have repeated the verse. After the players have completed the task and you are ready to move on just go back to the first verse. Coaching youth football drills like this one are so much fun.

The numbers game song goes as follows (best done in the tone of a military chant):

1. "Number one is on the run" - The players must dribble their ball around the area.

2. "Number two is sole of the show" - The players stand still and role the ball in different directions using the bottom of their foot.

3. "Number three is follow me" - The players will follow the coach in whatever he decides i.e. dribbling/tricks.

4. "Number four is head to the floor" - This one is fun and will require the players to lie down and use their ball as a pillow.

5. "Number five is stayin' alive" - (this comes from the beegees song) The coach says the first part and the players reply with "aah, ahh, aah, aah stayin' alive" whilst doing toe-taps on the ball and moving one arm diagonally up and down just for fun.

*** Remember, coaching youth football needs to be energetic - especially this drill. Also, don't just repeat the numbers all the way through. Start with one and go back to the first verse after every new number. ***

6. "Number six is do some tricks" - Allow the players to do their own tricks and skills.

7. "Number seven is down from heaven" - The players will throw the ball in the air and attempt to trap/control the ball.

8. "Number eight is swap with a mate" - The players will pass their ball to someone else and receive another ball, passing into space if necessary to avoid balls clashing.

There are other numbers, but the game can go on too long if your not careful. Remember to go back to the lower numbers frequently after presenting a new number.

Coaching youth football drills such as this one are great for progression and allowing each coach to put their own mark on the game and alter as they so wish.

-> Demonstrate clearly the ABC of passing and get one of the players to show everyone else.