English Soccer - King of the Ring!

The English Soccer league is renowned for it's fast-paced, challenging games where everyone wants the ball. This drill is perfect for coaching the players sevral different skills and techniques which are vital in a match environment.

Take a look at the diagram below for King of the Ring. It's a really easy set-up, you just need the players to get a soccer ball each and find space within the marked out area. 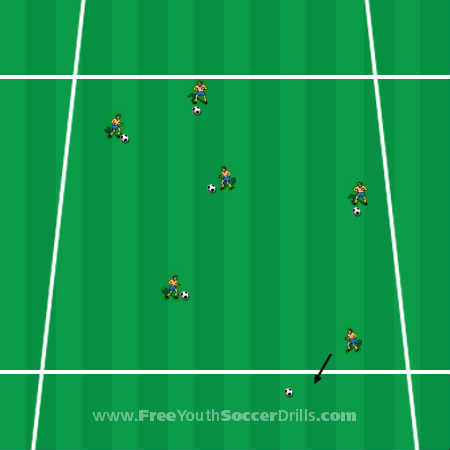 Each player has a soccer ball and the idea of the game is to dribble around the area keeping the soccer ball under close control. Should the soccer ball leave the marked out area at any point, that player is out and is not allowed to come back into the area.

Each player must also try and kick the other players soccer ball's out of the area whilst keeping close control of their own. Not easy! Make sure the players don't leave their ball in the corner and run around crazily kicking other balls out.

It is important to coach this game correctly. Demonstrate how the player should 'shield' the ball by turning their backs to the oncoming player so they cannot kick the ball.

The two main ways of losing the ball therefore is by a player kicking a player's ball out or by the player losing control of the ball and it going out of the area.

This game can have various different progressions to tailor at to the age group you have with you and can be played by mature players for a fun warm up game.

For older, more skilful players make sure they use their weaker foot only. A coach could reward points for skills and tricks used during the game.

Cones could be introduced as an additional hazard or you could make gates out of the cones and points awarded for dribbling through them.

-> Make sure the kids use little touches on the ball and demonstrate the shielding of the ball.

-> Explain how this drill could be used in a game situation.

Check out other U6 drills similar to this English Soccer one!