This football drill is a great exercise which focuses on many important aspects of football / soccer.I like to call this drill 'Pass, Shoot, Score & More'.

Take a look at the diagram below. You will need a few cones (3 minimum), some soccer balls and a goal. 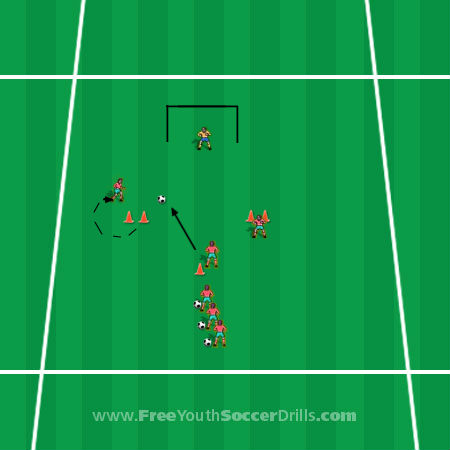 You will begin by having two soccer players stood with their back to the goal in front of the two cones, one on the left and one on the right. The other players will have a ball at their feet standing in a line behind the single cone as shown in the above diagram.

The first player in the line with a soccer ball will dribble up to the single cone and then shout either 'LEFT' or 'RIGHT'. In the example above the player has shouted 'LEFT' and therefore the player with his back to the goal has peeled away from the cones and made a run behind them towards the goal.

It is the responsibility of the player with the ball to wait until the player has began their run before passing the ball. This pass is known as a through pass because it will not be passed directly at the feet of the player running but instead slightly in front of them to run onto.

Once the player has made his run and reaches the ball he will have a shot at goal. The player who passed the ball will move up to the left position in front of the two cones and the move starts again.

Within this football drill there are several progressions which can be made.

- Remember that it can be difficult for the player making the run to 'time' their run perfectly, it takes practice.

- The same can be said for passing the ball. It shouldn't be too soft but also not too hard so it goes too far.

- This drill is more about the through pass and the off-the-ball running however don't forget that a good shot at the end should be coached correctly.