Football training drills for five and six year olds should be educational but they also need to be fun. Sharks & Minnows is a simple game but one that can also coach the right technique and skills.

Take a look at the diagram below for this Sharks & minnows game. You will need a marked out area with all of the young players at one end of the square and the coach in the middle. 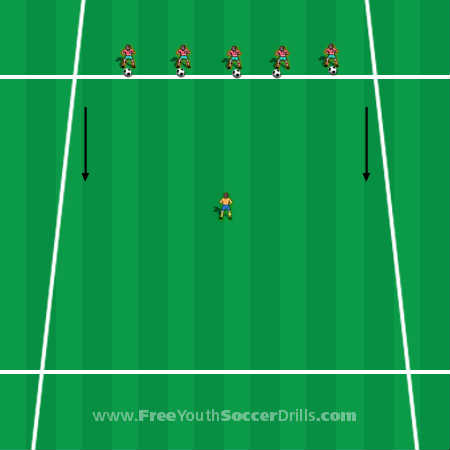 Sharks & minnows is a game more than a drill that will get the young players excited about playing soccer and therefore ideal as a warm up game.

All the young players will have a ball each at the end of the square and await the coaches orders. Explain to the players that you are a shark swimming around in the sea and they are fish who must get to the other end of the sea with their soccer ball without the shark eating them.

As I said, this game is designed to be fun, so...... there is a song / rhyme that must be sung beforethe game can begin.

The coach says: "Fishy, fishy swimming in the sea"

The players respond with: "Sharky, sharky you can't catch me"

The coach can shout "go" and now the players aim to dribble their soccer balls to the other side without getting caught by the shark (coach). The coach should allow all players to get to the other side first time around. After this, it is at the coaches discretion how many fishy they catch every round. At the beginning of each round the song will be sung again. Once a player has been caught they should sit at the side until there is one fishy left.

Football training drills like this one can be adapted to the players you have available and you could allow the players to be sharks too if you feel it would work.

*** Demonstrate clearly how to change direction with the ball using your feet! ***

At the end of each successful dribble from one end to the other, the coach could ask the fishy's a question regarding what technique the players should use. E.g. "How many feet should we use to dribble with the ball?" Of course, answer is 2. You could allow the fishy's to go around the Shark if they produce a good piece of skill such as the scissors.

See other U6 Football Training Drills