How to play soccer - 'Show the Coach'

Show the coach how to play soccer with this great drill. The idea is for the players to 'show off' their dribbling capabilities and skills that they have learnt either at home, at school or through previous coaching sessions. You should have by now been to my 'Skills & Tricks' page - if not go take a look and get the kids doing these turns and skills immediately!

Take a look at the layout below. You need to mark out an area shown by the white lines and place a handful of cones down. Each player will need a soccer ball each. The bottom part of the diagram shows two players facing each other which is a progression to the drill so leave some room for this also. 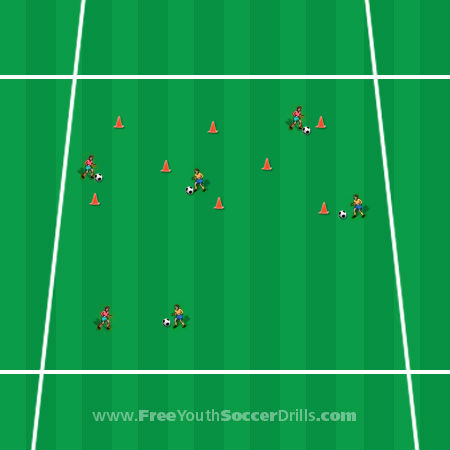 Kids love to show off and this drill gives them the opportunity to do that. The cones in effect act as defenders and the players have to dribble around them pretending to 'beat' and get past them or change direction quickly by doing a turn. All players should know how to do the drag back (or pull back) turn by now and they should show it here.

As the coach, this is your opportunity to praise the players and to stop the drill and allow some players to demonstrate what they can do to the others (and for you to show off how to play soccer!). Any players that are struggling won't feel under pressure by going up against some cones rather than players. The players should also know how to do the 'Step & Push' skill to get past a defender (if not, once again check the skills page on my site).

Now that the players have practised against cones, give them the opportunity to dribble pasta real defender. Perhaps the defender could be static for the first few goes but then allow the attacking player to try and get past them and for the defender to tackle.

With the cones in place and the players probably needing a rest after all the dribbling and skills just performed, this is a good chance to show any new skills or tricks you think they are ready for. Maybe the inside and outside roll or maybe a new turn?

-> Dribbling: inside and outside of foot. Little touches. Keep the ball close to you. Change direction often.

-> When performing skills make sure the players understand how it should look in a real game scenario. Start off doing the skill slowly then show it performed faster and how it/why it works.

-> Remember to keep it fun and praise the kids lots. Don't single one player out too often.

Learn how to play soccer with other U8 drills - Click Here!