Kids soccer drills need to be fun... and this one certainly delivers! Pirates of the Caribbean is a game designed for coaching the U4 age group. It needs a lot of energy from you as a coach.

Take a look at the simple layout of the drill below. To set-up you will need a cone for the kids to stand behind to begin. You will then need colored pinneys (or cones) down the other end to act as the treasure! 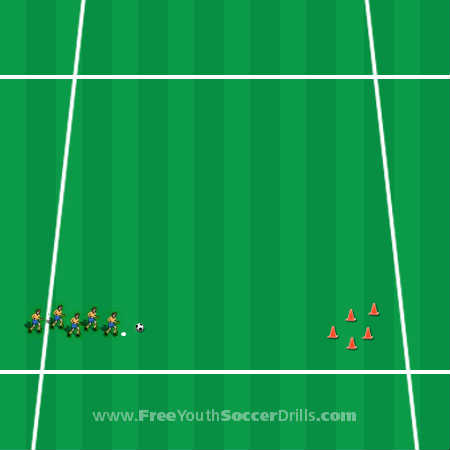 To begin you will need to get the kids excited about playing soccer. Tell the young players that this game is "...a fun game called pirates of the Caribbean. What noise do pirates make?" The kids will make an 'arghhh' noise. Then you need to tell them that pirates love treasure and the treasure is down the other end of the island.

The kids will need to go one at a time and pick up one piece of treasure (cone/pinney) and bring it back to the pirate ship.

1. To get the young 3 and 4 year olds to understand this game, play the first round without soccer balls.

2. The second time they should kick a soccer ball down with them.

A nice little progression to this and other kids soccer drills is adding cones leading up to the treasure so the kids have to weave in and out of them before getting to the end. By placing the cones down the young players have to dribble the soccer ball in different directions - not just straight.

You could also encourage a race parallel with each other to see who can get the most treasure in the quickest time!

-> See if the kids can change direction by placing the bottom of their foot on the ball and rolling it behind them. This will eventually turn into the drag-back turn.