Another fun kids soccer game is foxes and chickens. This game is exciting and gets the kids to change direction with the soccer ball at their feet.

Depending on the number of kids playing you will need to set-up a grid that the young players will not try and leave. You will need some pinneys, enough soccer balls for one-each and some helpful parents! 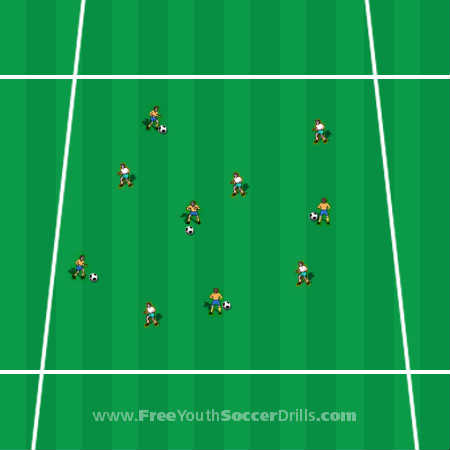 The aim for this soccer drill is for the young players to get the tail (pinney) from the parents. The parents act as the chickens and the kids are the foxes. The parents will need to put a pinney half tucked into the back of their pants/shorts. The kids have to chase after them and remove the pinney (acting as a tail).Once the kids have all of the pinneys the game ends. If there is a really fast parent then all of the foxes can aim to get the last chicken's tail!

A useful progression to this drill is to play the first game without soccer balls and then introduce them into the second game. This will help the young players understand what they have to do.

Once the kids are comfortable with the parents having the tail see if the kids can be the chickens for a while. This drill can be used for older players by having all chickens and foxes dribbling a ball as a fun warm up game to any session.

-> See if the kids can change direction by placing the bottom of their foot on the ball and rolling it behind them. This will eventually turn into the drag-back turn.

-> Get the kids to say with you 'oh no big toe' to encourage them not to use their toes to kick the ball.