Outside passing is a well known soccer drill for younger players. It involves dribbling, passing and awareness and combines the three throughout the drill.

Take a look at the diagram below. You will notice that cones have been placed to make a square a decent distance apart. You will need half the amount of soccer balls that there are players. For example, if you have eight players, you will only need four soccer balls. 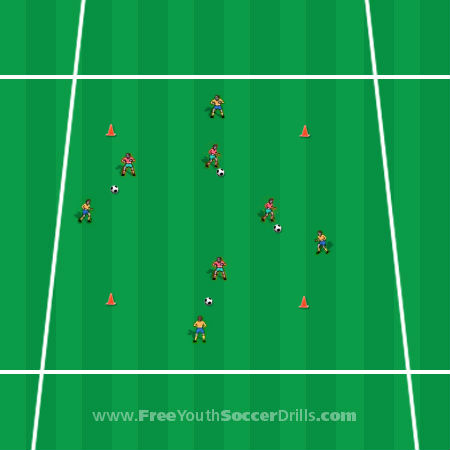 This game is about focusing on many aspects of soccer and relates to a real game scenario. You will have half your players on the outside of the coned area and the other players inside with a soccer ball each.

There are lots of ways to change this game.

1) Once the player on the outside receives the ball, instead of passing it back, he now dribbles in to the middle and the other player goes on the outside.

2) Instead of the player on the outside controlling the ball, he will now pass the ball back straight away to create a 1-2 pass.

-> Ensure that the correct passing technique is used. I.e. side of the foot and not the toe

-> The outside players don't have to stay still, they can move about to ensure better passing angles

Leave this 'outside passing' drill - go to other U9 drills!