This passing soccer drill is simple but effective and great for the U8 age group and above. At one time or another anyone that plays soccer will have taken part in a drill the same or similar to this one. Make sure you take a look at the 'progression' section to see my ideas for improving this drill. 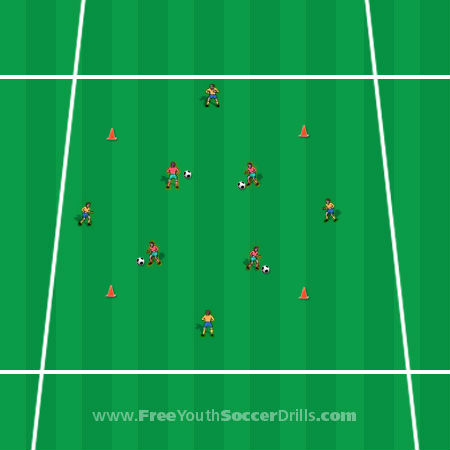 Take a look below at the different progression ideas for this drill.

1) The players on the outside should pass the ball back first time without controlling the ball first.

2) The players in the middle can practice using both feet to pass as well as the outisde of the foot.

3) You could allow the players on the outside to have a ball each and dribble up and down the line. Once a player in the middle needs to pass, they leave their ball and carry on with the 1,2 pass and then carry on dribbling their own ball on the outisde.

4) The players in the middle have to perform a skill, turn or trick before passing the ball to the outisde player.

5) You could make the square larger and make the players pass long-balls or shorten the square so they require close control.

6) After the player in the middle has passed their ball, they go and find another player on the outside who passes them someone elses ball.

-> Ensure that the inside of the foot is used for passing, not the toe.

-> When dribbling the ball, make sure that close control is used.

-> When passing the ball it shouldn't be too soft/slow, there needs to be some pace and conviction as they start to get older.