Soccer coaching this U10 to U12 drill is easy!

This drill will help your players understand how to play a 'through pass' or 'through ball' to an attacking player as well as offer reminders on how to pass accurately and shoot.

Take a look at the diagram below... you will need 3 cones, a few soccer balls and a goal. 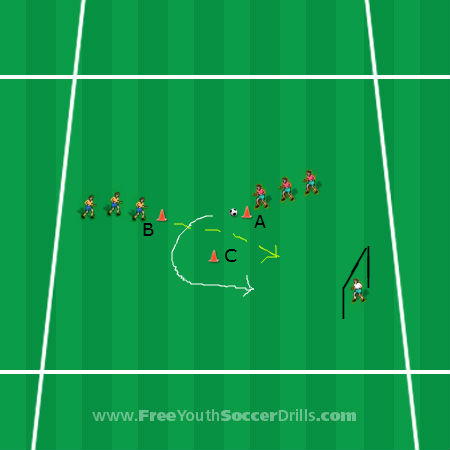 Cones A & C are acting as static defenders.

Remember to swap around your players at cones A & B to allow everyone to both pass and shoot.

If your players are becoming good at this drill, add a defender between cones A & C who tries to intercept the ball. You may need to widen the cones or ask the defender to stand in one spot at first but allow your soccer coaching skills to determine the best progression for this.

- Remember that it can be difficult for the player making the run to 'time' their run perfectly, it takes practice.

- The same can be said for passing the ball. It shouldn't be too soft but also not too hard so it goes too far.

- This drill is more about the through pass and the off-the-ball running however don't forget that a good shot at the end should be coached correctly.

Leave this soccer coaching drill - see other U10 to U12 drills!