This soccer coaching drill is called 'Shadow Play' and is a great game for the U8 age group. As the players start to get older they begin to understand the game of soccer in a different way. For example, this drill focuses on ball retention and the game focuses on not losing the ball (not allowing your opponent to get the ball from you).

Take a look at the diagram below. The great thing about this drill is that you only need a soccer ball between two players and a marked out area big enough to allow the amount of players you have to dribble with the ball freely. 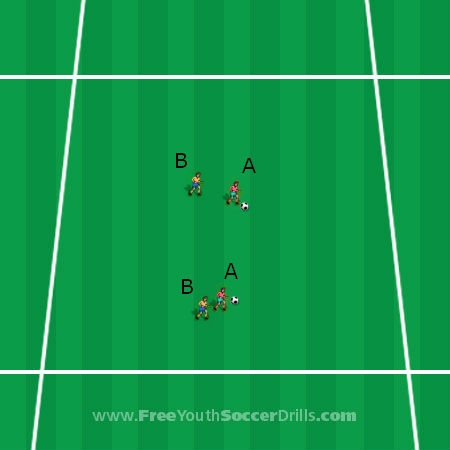 This drill is good for a warm up early on in your soccer coaching session. The idea is for player 'A' to dribble the ball around the area and always make sure that they keep their backs to player 'B'.

Player 'B' will not attempt to tackle player 'A' at this time just simply look to get in front of the player. This will encourage the player with the ball to change direction often and think about keeping the soccer ball close to them. After a couple of minutes, allow player 'B' to have the ball and player 'A' will now try to get in front of them.

There are some really good ways to change this game up and test both players. After both players have had a turn at dribbling and keeping their back to the other player you can progress to 'shoulder shadow play'. Player 'A' will continue to dribble the ball as they have been but player 'B' can now attempt to get alongside player 'A' and use their shoulder against theirs to knock them off balance.

Shoulder to shoulder nudging is very common in soccer and this will help both players learn how to use it both with and without the soccer ball. This is all about balance and trying to retain the ball and keep your back to player 'B'. After a few minutes, switch around players once more.

Another great progression from the shoulder nudge is to put it into a real game scenario. Player 'B' will now attempt to shoulder nudge player 'A' and also use their foot/toe to kick away the ball. Player 'A' must be strong and try and retain the ball under the pressure. This soccer coaching drill is now starting to turn the young players in to young men by showing them the physical contact side of soccer.

-> This drill is largely about dribbling, so ensure that good small touches are taken on the ball.

-> When dribbling, make sure that the player is low done with bent knees and changes direction frequently. Maybe even drop the shoulder one way and push off in opposite direction.

-> Player 'B' needs to use their shoulder in the correct way to unbalance player 'A', demonstrate this and make sure it is not malicious.

Try out these other Soccer Coaching Drills!