Take a look at the diagram below. This drill is really easy to setup, all you will need is a soccer ball for each player and a cone for each player. There are a few progressions on this drill which will require some additional items (such as a goal) at a later stage - see below. 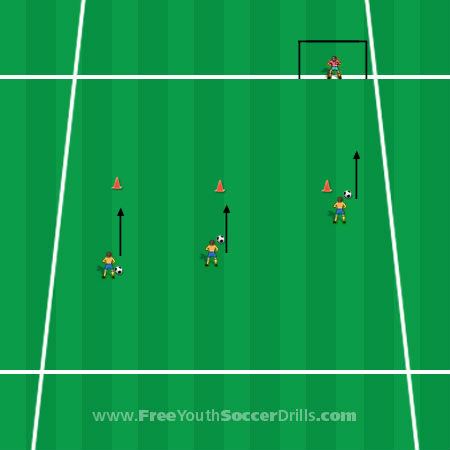 If you would like to see Soccer Video Clips of the Pros doing soccer dribbling - Click on this Link!

The players will have a chance at practicing skills in a non competitive environment. This will allow them to become better at skills such as the 'Step and Push' and the 'Scissors'. For more information on these skills, please visit the 'Skills & Tricks' section of Free Youth Soccer Drills.

This soccer dribbling drill is a way for the players to get creative with tricks and skills. Get the players to focus on the cone being a defender and they should use a skill to get past the cone.

As you can see from the diagram, you can add a goal at the end which the players can shoot at from different angles after they have completed their skill to get past the cone. If you have a goal-keeper this drill is good practice as there will be lots of shots on goal from many different angles.

Another progression can be to replace the cones with actual defenders. Make sure the defender does not move or tackle the player to begin with and then once the player doing the skill is more confident they can start to tackle as normal.

If the player is skilful enough to get past their defender, they are rewarded by having a shot on goal. If they score as well, then you might have a good player on your hands!

-> Make sure the players are coached how to do the 'Step and Push' skill - for more details... CLICK HERE

-> Make sure little touches are used when approaching the cone

Leave this soccer dribbling drill - see other U9 drills!