This soccer drill is really good fun but also coaches the young players some important coaching techniques and practice for matches.

Take a look at the diagram below for Truck & Trailer. It's really easy, you just need the players to get into pairs and for each player to have a soccer ball each. 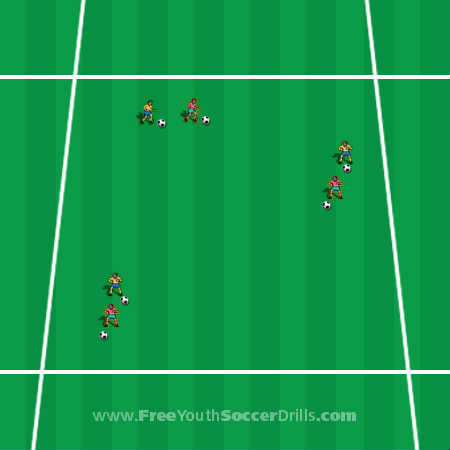 This soccer drill is called truck and trailer because throughout the game one player will have to follow another players movement just like a trailer does attached to a truck.

The game begins by getting the players into pairs and numbering the players 1 and 2. Number 1 will begin by dribbling the ball around the area upon coaches command and two will follow closely behind them wherever they go. Player 2 should not bump into the player in front or lose their ball at any time.

Once the players have got this going the coach can start to introduce the below commands.

Change - Both players should do a 180 degree turn to face the other way allowing the other player to now lead the way. Favoured turns for this age group include the drag back and hook turns.

Stop - Both players stop quickly and put their foot on top of the ball.

Leap Frog - The player at the front will crouch down low and allow the other player to jump over them and take the lead once the ball's have been regained. This is purely for fun!

Skill Time - A great way to teach the kids a skill or trick. Once the coach calls this command the players should do a trick of their choice. Take a look at the Skills section on left hand side for guidance.

A great progression to this soccer drill is to include cones around the area and when the players dribble past them they should knock them over by kicking (passing) their ball at the cone from distance. Either this or they could dribble throughgates that have been made by the cones. Once again, the inclusion of more advanced skills, tricks and flicks could be useful.

The best ones to use are the scissors (step-over). Other skills include the matthews/donovan, Ljungberg and Rivaldo turn (if you have no idea what these are... please go to the 'Skills & Tricks' page of my website).

You can also use this drill to practice turns. The dragback turn, Cruyff turn, Inside and Outside hook work really well here!

-> Make sure the kids use little touches and demonstrate at every new coaching point.

-> Demonstrate the correct technique for passing the ball. ABC of passing.

Leave this soccer drill - return to other U7 drills!