Soccer Drills! The Chain Game - U8

Soccer drills such as the 'chain game' are a good way of having some fun between other drills. Sometimes it is important to remember that if the players are not having fun, they will not want to participate or turn up in future. Playing a game such as this one each session helps keep the players interested and having lots of fun.

Take a look at the diagram below. You will need to mark out a medium sized area (as shown by the orange cones) and each player will need a soccer ball to begin with. 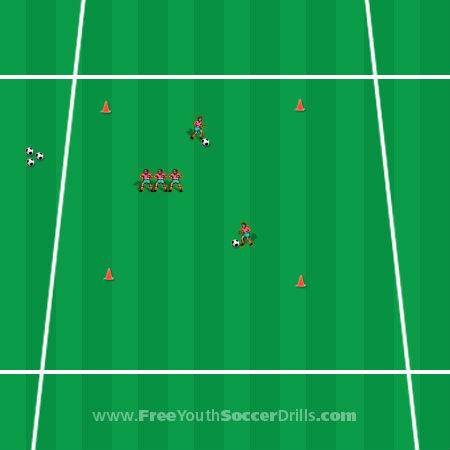 All players begin by dribbling around in the marked out area with their soccer ball. It is then up the coach to decide who will be the first player in the chain. This could be decided at random or given to a player who lost control of their ball whilst dribbling for example.

Whichever player is the first link of the chain, they no longer require their soccer ball and instead try and kick another players ball out of the area. It is up to the other players to shield their ball and keep their backs to this player.

When a players ball has been kicked out of the area they then link arms (or hold hands) with this player to create a larger chain. These two people then work together to kick away someone elses ball. The game keeps going until only one player is left with a soccer ball.

There are a few progressions I have used to soccer drills like this one before such as making the players only dribble the soccer ball with their weaker foot to make it easier on the 'chain'.

*I would also like to hear them - email info@freeyouthsoccerdrills.com with your ideas on how to make this drill more fun!*

You could also make the players do a trick or turn every 5-10 seconds to avade being caught by the chain!

-> Make sure the players are dribbling with the soccer ball correctly - small touches, both feet and changing direction often.

-> When the players are in the chain make sure they talk to each other (communication is important in soccer) so they don't pull apart in opposite directions.