There are three attacking positions which will be discussed on this page. Each position will be shown in a diagram with discussion on why this position should be used and what a player is expected to do in this role.

The three position are:

The first position to discuss is the wing forward. Take a look at the diagram below.

(position's that are of a lighter grey color will be discussed) 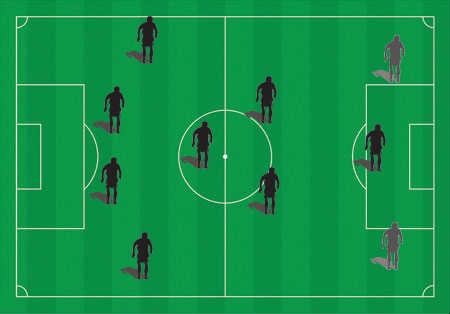 Some useful soccer information on the wing forward would be that it can provide excellent attacking plays from wide positions. This can stretch opposition defences and allow the central striker and midfielders more room to play through the middle.

The second attacking position to look at will be the support striker. 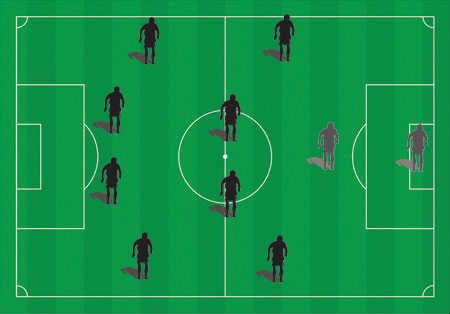 The support striking position is almost self explanatory. It really is a player who supports the striker. As you can see from the diagram they are positioned just behind the central striker.

The type of player who regularly occupies this position should be able to drop off from the defence and find the gap between the oppositions midfield and defence. From here they should look to dribble the ball at defenders, take a shot or make a decisive pass for fellow team-mates.

With difficult to play roles like this one, players should gather as much soccer information as they can on what is expected from them in these positions.

Wayne Rooney (Manchester United & England) frequently plays as a support striker for club and country. He plays this position very well by utilising the free space behind the opposition midfielders.

The final attacking position to discuss will be the center forward. 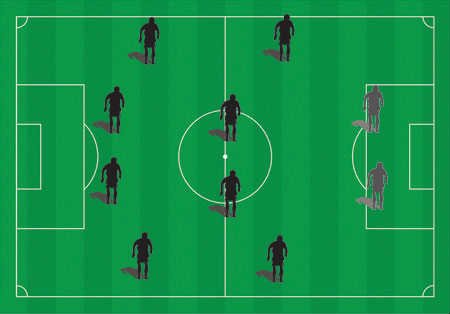 To take a look at midfield or defensive positions... click here!

Depending on the formation you play there may be 1, 2 or occasionally even 3 center forwards. You should always start with at least 1 player in this position. This is the player that should cause the opposition defence the most problems.

The center forward is often one of two things. Either short & quick or tall & strong. If they have both then even better! A tall center forward would look to hold the ball up using their strength and try to score goals with their head from crosses. Quick center forwards look for through passes to run onto past the opposition defenders and capitalise on any defensive errors in the penalty box.

Useful soccer information on a center forward is to make sure they help to win back possession of the ball when the opposition has it. Defending starts from the front (your attacking players). If your team has the ball then the opposition cannot score.