The soccer pitch can be a players best weapon when they get a feel for how the soccer ball will play. This great drill is called 3v1 and is ideally suited for U10+ age group.

Take a look at the diagram below. You will see I have marked out three coned off squares using cones (A, B & C). This drill requires 12 players but can be adjusted according to the number of players you have available. Each grid requires just one soccer ball (3 in total). 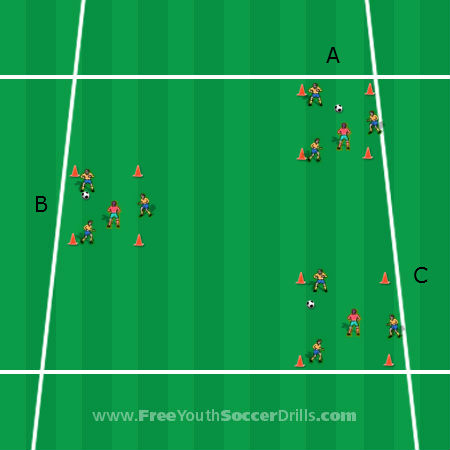 Allow them to play like this for a few minutes and change around the person in the middle so they all get to have a go at chasing the soccer ball.

You can then use the following commands to shake the drill up a bit:

There are always great ways to shake up soccer drills. If you take a look at the diagram you will notice that Grid 'C' is slightly larger than 'A' & 'B', this has two benefits:

You could make up a new command such as 'All In' and all players could leave their grids and begin playing a 9v3 game in the middle of the pitch.

You could create some competition. See which grid (A, B, or C) can make the most passes without the player in the middle touching the ball.

-> Focus heavily on the correct passing technique (inside of the foot).

-> Once a pass is made, a player should then move and find space to receive a pass.

-> The player in the middle should try and anticipate where the next pass will go and intercept.