This soccer drill will help with a players soccer position when defending. Check out this fun U8 game called 'Ankle Slaps' and allow the players to learn whilst having fun. I use this as a warm up exercise when coaching older players too because the correct stance in soccer is very important. 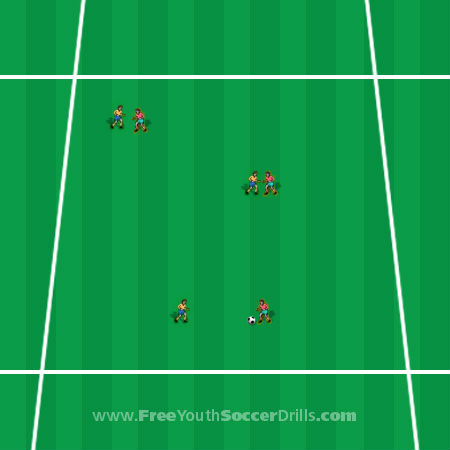 The idea of ankle slaps is for two players to face one another in a sideways stance with one foot in front of the other. The players should be crouching down at the knees and will be moving around, not stationery. A player gets a 'point' if they manage to tap their opponents ankle.

The idea of this drill is for a player to practice their defensive soccer position whilst having some fun at the same time. This position is used in soccer when an opposing player is dribbling the ball at a defender. The defender must not face them straight on or they will lose balance and won't turn quick enough. To avoid this the defender is sideways on and forces the attacker away from the danger area/goal.

When the players have had a few minutes of doing ankle slaps they can then practise their stance in a 'game situation' as shown at bottom of diagram above. Make sure that one player has a soccer ball and dribbles toward the defender who will occupy the stance. The defender needs to do two things:

1) Force the player out wide by using the sideways stance

2) Do not allow the attacker to dribble past them

*When the time is right, get a foot in to make the tackle*

-> For the attacker, make sure they dribble the ball correctly (little touches) and to help with the exercise, get them to dribble away from the defender to retain the ball but also to show that the defender is doing their job correctly.

-> Show the players how to make a good, clean tackle of the ball. They don't always have to slide in and can use the side of their foot.

Leave this soccer position drill - go to other U8 drills!