A fun U4 soccer practice drill that kids will love is the 'sleeping bear'. This is a simple drill but effective at getting the young 3 and 4 year olds to dribble the soccer ball.

You will need the kids lined up next to one another with a soccer ball each at their feet. The coach or a parent will act as the sleeping bear down the other end of the marked out area. 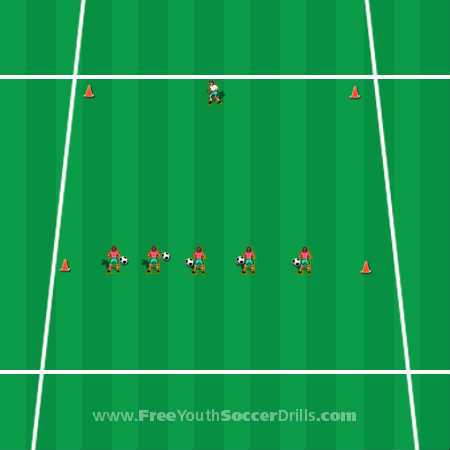 This game is all about getting the kids to take little touches of the soccer ball. The kids begin the game by shouting out altogether "What time is it sleeping bear?" The sleeping bear (who will be pretending to sleep talk) will respond with either one-o-clock, two-o-clock, three-o-clock or four-o-clock.

If the bear says three-o-clock, the kids will take three small touches/kicks of the soccer ball toward the bear. This continues until the kids get close to the sleeping bear. The bear will then wake-up and chase the kids back to where they started. Don't be too scary though or they will cry!

A useful progression to this soccer practice drill is to see how quickly the kids can get back to where they started after the bear wakes up. They must take their ball with them remember. Also, get the kids to show you their drag-back turns and reward the best ones.

**Drag back turns need to be performed by young players using a size 3 soccer ball or they will find it very difficult and trip over the ball.**

-> See if the kids can change direction by placing the bottom of their foot on the ball and rolling it behind them. This will eventually turn into the drag-back turn. Do this when the bear wakes up!

-> Get the kids to say with you 'oh no big toe' to encourage them not to use their toes to kick the ball.