This soccer scrimmage drill is perfect for the U10 to U12 age group. It gets all players playing quickly and competing hard to win the ball.

Take a look at the diagram below. You will need two teams of players, a couple of cones and some soccer balls. 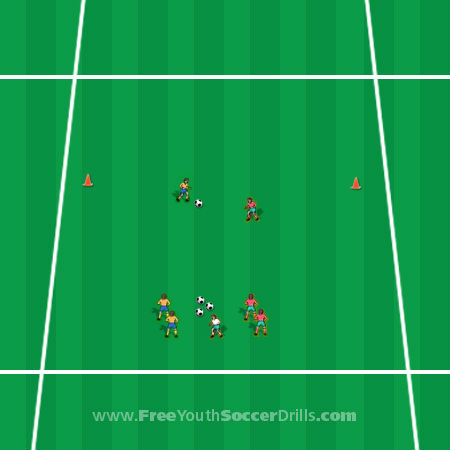 You will see that there are two teams at the bottom waiting in line with the coach between them. The coach will have soccer balls by his feet.

The drill begins by the coach shouting 'GO!' and kicking one of the soccer balls in to the middle of a marked out area. The first two people (one from each team) rush out toward the soccer ball and attempt to dribble toward a cone and when close enough shoot to knock it over. The coach should award one point for hitting the cone and two points for knocking it over. Which ever player doesn't have the ball should try and tackle the player or shield the cone.

Once a point is gained from a single player or the coach wants to move on, the coach will shout 'Game Over' and will proceed with the next round by kicking a ball in for the next players in line.

Focus as much attention on how the players defend as they do attack, this drill can teach the players how to win back a lost ball.

There are so many ways to mix up this quick 1v1 drill. Take a look at these:

-> Defending is just as important as attacking in this game, teach the player how to be aggressive and win back a lost ball.

-> For accuracy when shooting at a single cone, use the inside of the foot.

-> When dribbling with the ball, takes lots of small touches and use both the inside and outside of the foot.