This soccer scrimmage game is really fun for younger players but also teaches them to play out wide rather than through the middle.

Take a look at the diagram below. This game is ideal for player numbers between 6 and 10, preferably even numbers. You will need to make wide gates at each end of the pitch, one soccer ball and pinnies to separate two teams. 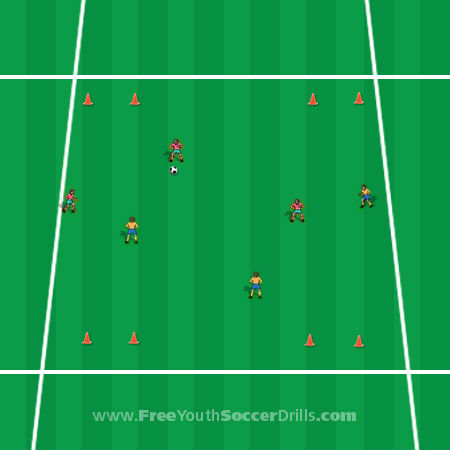 The idea of this game is for the players to dribble the soccer ball through the wide gates at the end of a marked out area to score a goal. Up until now, young players only think about dribbling directly at the goal in the middle of the area however we are now going to give them a choice of two gates. However, the gates are deliberately placed out wide to encourage players to spread-out over the whole area.

This soccer scrimmage game will still remain fun and slightly competitive with players wanting to score a goal. Make sure that the players dribble through the goal instead of shooting to begin with.

The gates shouldn't be too wide apart and this should discourage the players from shooting as opposed to dribbling through the gates.

As the coach if you believe that the players are going for only one of their goals or are only ever going for the closest goal to them rather than one with no players, then you can stand in one of the goals and not let them through. Alternatively you could number the gates and whenever you shout that number out that is the gate they have to dribble through.

Another good progression to this game is to add a third central gate after a while to see if they go back to using the middle gate or whether they still use the wide ones.

If you wish to highlight to the players good or bad positioning, just shout 'FREEZE' at any time to make the players stop still.

If you wish to improve the players shooting, then change the rules so that players can shoot at the wide gates.

-> Ensure that the correct dribbling technique is used. I.e. inside and outside of both feet and most importantly looking up.

-> Make sure the defenders start to understand where to position themselves and move around to block both gates.