Players love soccer shooting drills. This exercise is designed to teach the players how to shoot correctly and also involves build up play which the coach can assist with.

Up until now the focus should have been more on passing and dribbling rather than shooting. As the players get older, they need to know how to shoot correctly which includes which part of the foot to use and whether to shoot hard or go for placement.

Take a look at the diagram below. You will need a goal at one end and a goal-keeper (Remember that all players should have a turn in goal at a young age), two cones and a soccer ball for each player. 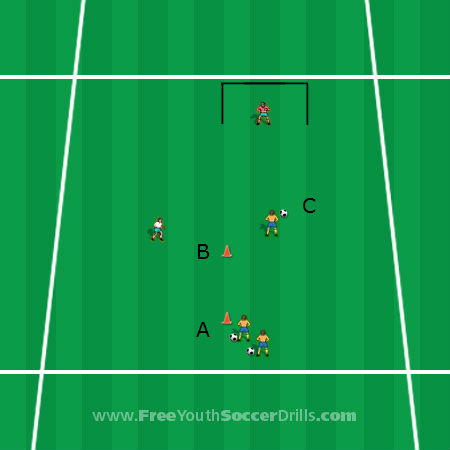 The players start behind the cone situated at point 'A' with a soccer ball each. One player will dribble with their ball toward point 'B' and then pass their ball to the coach (wearing the white shirt in diagram).

The coach will pass the ball toward point 'C' and the player will then run toward the ball and shoot at goal. The coach should allow the players to have a few goes each to see if the players always shoot with power rather than precision.

Soccer shooting drills such as this one allow for plenty of progression. For example, it is important that the players use both feet. Therefore, the coach should stand on the other side and pass over to the left.

The coach could also loft the ball in the air slightly so the player has to try and kick the soccer ball on the volley.

If the players are always hitting with power down the middle of the goal, place cones in the corner (next to goal post) of each side of the goal and ask the players to aim for those.

You can also try moving the cones situated at points 'A' and 'B' so the players have to shoot at the goal from an angle.

-> Explain that the dribbling and pass to the coach is an important aspect to this drill... not just the shooting! Click HERE for a passing drill.

-> Explain that placing the ball with the side of the foot can be better than hitting hard using laces.

-> Don't allow the player to ever shoot with their toes.

Leave this U9 soccer shooting drill - see other U9 drills!