There are many soccer skills that can be coached in this game. This is probably my favourite coaching drill for young kids because of the pure enjoyment they get out of it and it involves each kid having a ball at their feet at all times. This game is called 'the pirate ship'.

You will need to mark out an area big enough so that the young players can comfortably dribble their soccer balls around without constantly bumping into others. The kids (and yourself) will need a soccer ball each.

This game requires a lot of enthusiasm and the more you remember the commands, which I will go through in a moment, the more enjoyable the game becomes and the more soccer skills you can bring into the game.

Take a look at the diagram below. 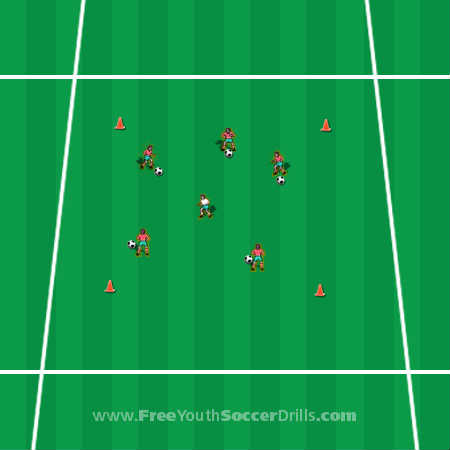 The game starts with each child having a ball at their feet and being told that the game is called the pirate ship and that the marked out area is the 'ship' they must stay on.

Begin simple by getting the kids to dribble around the ship and throw in a couple of coaching points such as inside/outside of the feet to dribble and changing directions. Nice little soccer skills to begin with. Then one-by-one tell the kids to 'freeze' or 'stand-still' and introduce a new command for them to do. This is where the fun starts and the soccer skills are implemented.

The different commands are as follows:

"The captain's coming" = the kids stop, place one foot on the ball and salute the captain by saying "ay, ay captain!"

"climb the riggin" = on the spot the kids do 'toe-taps' on the ball and with their hands climb up an imaginary ladder.

*****repeat previous commands - repetition is good in this game*****

"Scrub the decks" = on the spot the kids roll the ball backwards and forwards using the bottom of their foot. Use both feet!

"Polish the decks" = on the spot, this time the kids will move the ball from left-to-right using the bottom of their foot.

"Captain's wife" = the kids love this one. All they do is freeze, put one foot on the ball, hands on their hips and go 'oooh la la'

"Starboard turn" = the kids (perhaps without knowing it) will learn a quick turn here known as the dragback/pull-back turn. Get the kids to stop, put one foot on the ball, and roll the ball behind them using the bottom of their foot.

"Man overboard" = the kids dribble quickly to the edge of the ship (area), place their foot on the ball, hand on their forehead as if their looking for somebody. On your command the kids wil continue dribbling.

*****What I did with this game was played it as a warm-up every session with the same kids and every time introduce a new command. The kids will not get bored of this game*****

"Seagulls are coming" = You pretend to be a seagull who wants to eat their soccer ball. The kids on hearing this command will drop to the floor quickly and protect their ball with their body and hands. You should run around the ship with your arms out like a bird until you tell them to carry on dribbling.

This game involves many different soccer skills but adjust certain parts of the game that work for you. I start off with the 'saluting of the captain' amd use this one throughout totalk to the kids, give them a rest and introduce a new command because the kids are still on this command.

To finish the game you could add "stealing the treasure" into the game. This involves you as the coach being a nasty pirate who kicks away the kids soccer balls outside of the ship.

Once the kids ball is outside of the ship/area then they are out and the winner will be the last one remaining. A coaching point to include here would be getting the kids to change directionand keep their body between you and the soccer ball so not to lose it.

I've covered several coaching points already but the beauty of this game is that kids don't realise they are doing any 'coaching' because of how fun the game is.

Rolling the ball from side-to-side with both feet is great for balance. As is 'climbing the riggin'. Doing the starboard turn is getting them prepared for learning other turns. So many different soccer skills in a fun game... ideal!

Leave these soccer skills - go to other U5 drills