These youth soccer drills are ideal for the beginner goalkeeper. If you are looking for more advanced goalkeeping drills please select the goalkeeping button on the right hand side.

The first thing you need to do as a coach if you are having a goalkeeping practice is the below basic ball handling skills. This will determine what a players ball handling skills arelike and also their reflexes. These also count as good warm-up drills for older players.

The bold titles below are all separate ball handling goalie youth soccer drills. Please ensure all players have a soccer ball each!

A coach at the beginning of the session (and reiterated throughout) should tell the players that if at anytime they drop their ball onto the ground they need to 'pounce' on to it and get it quickly.

To do this a player should get close to the ball, drop to the floor and immediately put both hands on to the ball. This will be sufficient for beginners. 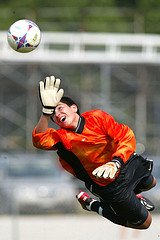 Start off nice and easy. The ankle rolls involves the player placing the ball on the floor and rolling the ball around the ankles ensuring two hands are on the ball at all times where possible.

Start with rolling the ball around one leg and then the other. After 30 seconds get the players to close their legs and roll around both legs.

***For these youth soccer drills, players should be using the tips of the fingers to roll the ball around*** 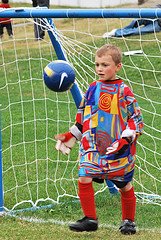 Give the players a brief rest by getting them to sit on the floor however use this time to get the players moving the ball around their feet and bodies.

Next, get the goalies to hold the ball in both hands and (whilst sitting still) stretch as far to the right and place the ball on the ground with both hands still on the ball. Do the same for the left and in front and behind them.

Now get the goalies to lift up a leg and move the ball under it, then place this leg down whilst lifting up the opposite leg and moving the ball around this leg. This should be once again like a figure of eight with both legs lifting up and downso not to touch the ball or get in the way. 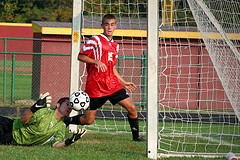 Now get the players with a ball each and on their feet ready to go. An area will have been marked out and the players will be asked by the coach to stand still and move the ball around their knees, mid rift and upper body. Remember to avoid touching theball with the body parts whilst doing this to ensure the player is holding on to the ball and not just rolling it.

The next progression to these youth soccer drills is to walk around slowly with the ball in their hands and again move the ball around low and high body parts without dropping the ball. If a player should drop the ball they should pounce on it as discussed above.

***Goalies should be on their toes at all times***

Once the players are confident with this get them to walk around and move the ball from one hand to the other starting with close hands. After a minute get them to separate their hands so the likelihood of them dropping the ball increases and see how the players dive on to the ball to reclaim it.

If the players are really progressing nicely you can get them to move the ball around their legs in a figure 8 motion whilst moving, this will really test them out.

Remember to keep it fun. Plenty of encouragement and if a player drops the ball race after it and chase them to it making sure they get it before you do.

Next, get the goalies to move around the area and bounce the ball down with two hands and catch it again with both hands. Other good youth soccer drills ideas include throwing the ball up high with one hand and gather it with the other. To progress from this you could ask the players to let the ball bounce once after throwing it up and then pouncing on the ball with both hands afterwards. 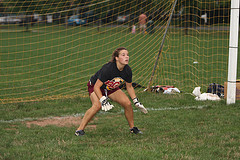 Now is the time to get them looking like a real goalkeeper. Take a look at the picture to the right for reference to assist with the following youth soccer drills. Get the players to put the ball on the floor for a minute to demonstrate the standing goalkeeping stance.

The player should be standing with their feet shoulder width apart. Their hands should be up around the chest, fingers open and out a little way away from the body. Their body weight should be forward with knees slightly bent.

Now get the players to move around the area in a side-step motion in this position. Their hands should remain still and knees bent. 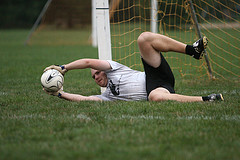 The next important thing for a player to learn from this stance is the sideways dive. Demonstrate this in 5 stages:

1. Have a soccer ball to your side and show the goalkeeping standing stance.

2. Take a big sideways step toward the ball with one leg keeping the furthest away leg still.

3. Bend at the knee of the leg closest to the ball and get your hands out toward the ball.

4. In one motion allow yourself to drop sideways and put both hands on the ball landing on your side.

5. The last part of the sideways dive is to lift the leg up that is furthest away from the ground to balance yourself. This would naturally happen if done at speed.

When the players are happy with this and the previous goalie youth soccer drills and their solid goalkeeping stance then the players can have a game. Get the players to sideways step around the area again. This time the coach will shout 'BALL!' and when they do so the players must dive onto the ball using the sideways dive they have just been showed.

This technique is also used in the English game of cricket. It provides a wider surface area to stop the ball going past. Whilst facing forward, a player would need to twist with both feet to the left and go down on their right knee ensuring no gaps between both feet for ball to go past.

The barrier becomes apparent when the player shows that if his hands missed the ball, the lower part of his right leg would stop the ball going any further. Youth soccer drills like this are very useful for younger players who may struggle using their hands. 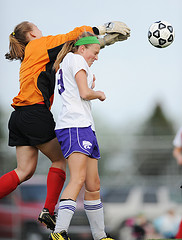 Now that these ball familiarity drills have been completed it is time to pair the players up to try out some more youth soccer drills.

It is good to start with simple drills in pairs, such as:

- One player kicks/passes the ball toward the other player who must do a sideways dive to catch the ball.

- The players throw a ball to each other (some high / some low) and the player must catch the ball with two hands.

- One player rolls the ball toward the other who does a long barrier stop and picks up the ball. Swap turns.

- Goalies take it in turn to kick a ball out of their hands and for the other player to catch.

I always like to finish goalkeeping youth soccer drills sessions with a fun game or two. Below our my favorites that work really well with young players.

- Line the players up at the side of a goal. One by one they have to save a penalty kick and if they do they remain in the game and join the back of the queue. If you score, then they must watch at the sides. I always allow everyone to saveon the first round so not to cause players to get upset. Plenty of encouragement needed at all times!