This corner kick drill for soccer focuses on the best way to attack and defend at corner set pieces. Not enough time is spent on free kicks and corners in training and once you have a good bunch of players who are willing to learn new skills, give this one a try.

You will need some soccer balls by the corner, a corner kick taker (can be coach if required) and some attacking players and defending players, in different colors. 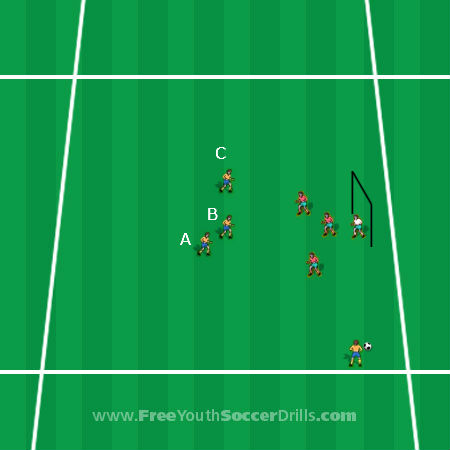 **Depending upon local and national rulings you may not be able to 'head' the ball in soccer. If you can, allow the players to practise heading the ball but only in moderation otherwise just focus on getting the ball to feet.**

The most basic way of a corner being taken is for the attackers to just simply be standing in the box hoping the ball will come close to them. It is almost impossible to get enough power on the ball from a standing jump if you are a distance away.

Instead of this, have your players do a wide variety of things. In the picture above you will see that players A,B,C in yellow are attacking players standing further back from the goal than they would usually do so. The plan is for them to run in once the ball has been kicked and meet the ball with power either by heading or by kicking.

Player B: could make a run towards the goalkeeper and hope for a tap-in.

These decisions can either be made prior to the game or during the game by the players themselves (although this may lead to confusion).

It is also a perfect opportunity to work on your defenders ability to clear the ball. No defender should be controlling the ball in the box and trying to be clever, instead they should look to get the ball out of the area and high up the pitch or out for a throw.

There are two types of defending at corners:

1) Zonal - this is where the defenders stand in particular positions regardless of where the attacking players are.

2) Man-marking - each defender should be marking a man each and follow them when the ball is kicked from the corner.

The most commonly used one (in 11-a-side) is option 2 with spare defenders standing on the near and far posts ready to clear the line.

You can tell the corner kick taker to kick the ball at a particular place (for example the middle of the goal or the near post). You can then tell your attacking players to attack that area.

In this example, if the corner kick taker is going to kick the ball in the middle of the attacking area, players A, B & C could all run towards the center of the goal.

Alternatively, player B could make a false run and then stay back in case the ball is cleared to tyhe edge of the area and then shoot from distance.

Need help with your goal-keeper to? Try this!

-> Ensure that the correct passing technique is used. I.e. side of the foot. Help younger players with getting loft on the ball.

-> If heading, use the forehead and not the top of the head or any other part.