Goalkeeping drills for intermediate players will focus on three key elements. Rolls / throws will be the first, useful cone drills next followed lastly by more advanced drills in two's and three's.

These drills should be used for players under the age of 13 or for completely new goalkeepers of all ages. If you require more basic goalkeeping drills then please follow the link below. 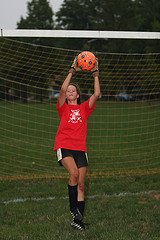 Start off with some basic ball handling techniques. Get each player to place a ball in one hand and throw it up in the air and then catch it with the other hand. Other drills include walking around and bouncing the ball from one hand to the next. Remember, if a ball is dropped the player should dive on the ball and instantly get two hands on the ball.

For other basic ball handling techniques check out the 'beginner goalie drills' from this website.

There are various different rolls and throws that a young goalkeeper and especially older / more advanced goalkeepers should know. Check out the below for a simple explanation of each throw.

Overhead Throw - This is the same as a normal throw you see at professional level. Both feet will be planted and shoulder width apart with the ball in both hands. Bring the ball back behind the head and release the ball once the ball comes forward and is above the head once more. A simple but effective throw for young goalkeepers.

Underarm Roll - This is the most simple of ball releases and is used to pass the ball to a team mate thats close to you. This is the only ball release that a U8 player or below should use. For young players, they should place both hands on the ball and bring the ball behind them to the side and release along the ground to the players feet.

Sideways Throw - This throw involves releasing the ball from shoulder height. One foot should be facing the direction you wish to throw if you are right handed then your left foot would be facing the target. Using one or two hands (older players would only use one hand for further distance) hold the soccer ball at arms length in front of you and then in a single movement bring the ball behind your body from the side and release from shoulder height letting go of the ball at the last minute to gain required accuracy and distance.

Overarm throw - Single hand only throw. This is more advanced but the most popular throw used by older/advanced goalkeepers. The ball is eventually released like a catapult from level with or above the head. Start with a sideways standing stance (if ball is in right hand then left foot forward).

The ball gets pulled back behind the body away from the standing leg around knee/waist height and the other arm is used to point in the direction of the target and for balance. Once the ball has been brought back to its furthest point, the arm must then bring the ball back around to the front and at a height so it finishes at head height and can be released.

The back leg will naturally lift up, move forward and land ahead of the front leg. The ball should be released when in line with the body. Difficult to explain, but do it in steps and practice. 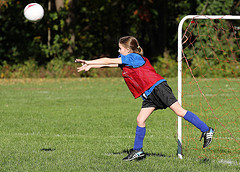 There are plenty of fun goalkeeping drills that you can do that involve the use of cones as markers. Take a look at the diagram below: 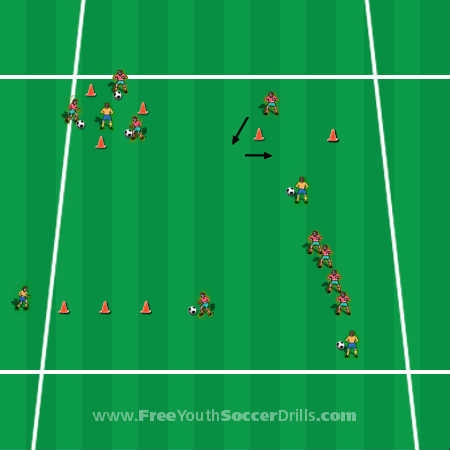 As I am used to coaching in large numbers, I have divided the diagram above into four separate drills which could all take place at the same time with players swapping each drill upon coaches request.

I will start with the top-left drill;

For this drill you need three players on the outside of the triangle with a ball each and one player in the center who will be the goalie (in orange). The players on the outside will pass their soccer ball toward the goalie in the middle when they face them and shout 'kick' or 'go'. The player in the middle must then stop the ball from going past them using the sideways dive as shown in 'beginner goalie drills'.

This drill is the one situated at the top right of the diagram. Two cones will be placed representing a goal. The goalie (in red) must run around the goal as shown by the arrows and then side step to the center of the goal. Just as the goalie is side stepping, the player with the ball (in orange) will pass the ball toward the goal. The goalie must react to the ball by saving it using the sideways dive.

Goalkeeping Drills - Side to Side & Dive

This drill is at the bottom left of the diagram. The goalie (in orange) must side step between the cones until they reach the end. The player with the ball (in red) will kick the ball to the players left or right once they are past the last cone. The goalie must then make a routine save using the sideways dive.

This drill is my favorite and is about quick reactions. Situated bottom right of the diagram, the coach (in orange) has the ball at their feet. The other four players (in red) will be standing in a line awaiting the coaches command. The four players will be given a number each from 1 to 4. The coach calls their number and kicks the ball along the ground to the left or right of the standing players. The only player who can do a sideways dive and stop the ball is the player whose number was called. To make it easier the coach might want to say a number followed by 'left' or 'right' so the players know which way to dive. Take a look at this diagram below which focuses on other goalkeeping drills in teams of two's and three's. 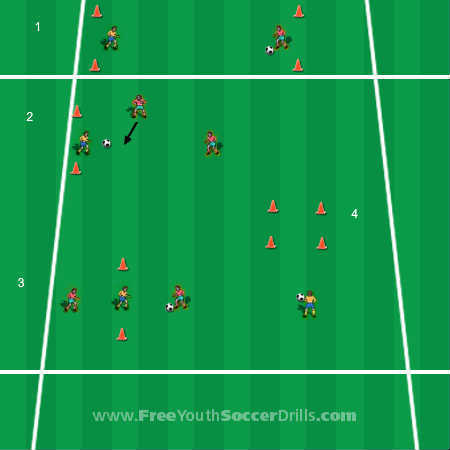 Goalkeeping Drills - one v one

The first drill on the above diagram (1) is a fun one v one game which focuses on two aspects - throws and saves. The players take it in turn to try and throw the soccer ball (using techniques shown above) past the opposing player between the cones acting as a goal. The other player must stop this from happening from saving/stopping the soccer ball by any means possible.

Take a look at drill 2. The red player furthest right (perhaps the coach) kicks the ball at the goal in which the goalkeeper is guarding. The goalkeeper must save the ball and keep the ball as close to there body as possible. However, if the ball should bounce off the goalkeeper then the attacking player (in red with arrow)must try and get the ball and kick it in the goal. If the goalie does spill the ball, then they can still make a second save from the rebound.

The drill (3) is designed for the central player (acting as goalie in orange) to have fast reflexes and save the ball that is kicked toward them. The players in red take it in turn to try and kick the soccer ball to each other past the goalie.

Its a good idea to practice throwing accuracy. Drill number 4 shows a player with a ball facing an orange coned off square. This square is acting as a target in which the player must throw the ball into. Allow the players to experiment with all different types of throws. 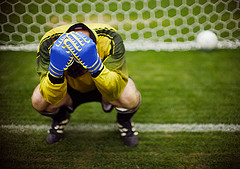