Soccer games such as this one called 'Wide Crosses' begin to coach the players different aspects to soccer now that they are getting slightly older.

Take a look at the diagram below. This game is an adaptation of 'Wide Gates' which is for the U9 age group.

You will need a set of cones to mark out the wide areas, two goals at either end of the pitch and two teams of players. 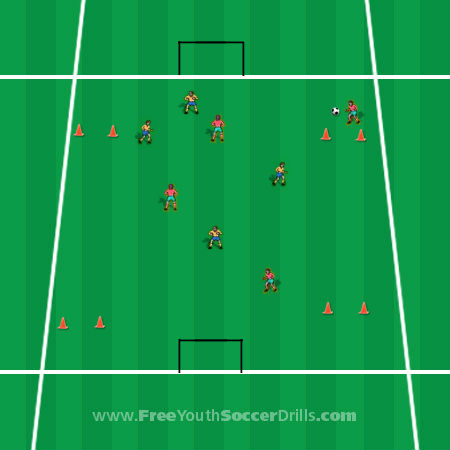 Soccer games can be used to coach new ways of playing soccer but in a fun environment. Up until the U10 to U12 age group, whenever a player receives the ball they tend to run straight at goal but this soccer drill teaches the player to find wide space first.

Begin by selecting two teams. You will tell the players that this is very similar to a normal game where you have to score in the goal but before they can shoot they have to first have a member of their team dribble the ball through one of the orange gates.

You should encourage players to cross the ball in at height from a wide position. Many players will struggle to get much loft on the ball at first but the more they practice the easier it will become.

ONLY allow a goal to be scored which has come directly from a cross or pass from a player who has just dribbled through the wide cones!

**If the game is not having as many crosses as you would hope for, tell all defenders they are not allowed to go out wide to get the ball, they can only win it once it has been crossed in**

You can award points to the players/teams instead of just goals. For example:

It is probably best not to use goal-keepers for the U10 to U12 age groups as it can be hard to score from a cross. As the players get older, introduce goal-keepers and adjust the size of goals accordingly.

-> Ensure that the correct dribbling technique is used. I.e. inside and outside of both feet and most importantly looking up. The players should look up before crossing a ball from a wide area.

-> Make sure the defenders start to understand where to position themselves when a ball is being crossed in.

-> Start to make players understand the importance and benefits of spacial awareness when playing these soccer games.